How to do color identification through machine learning on Arduino

In this Arduno Machine learning project we're going to use an RGB sensor to identify objects based on their color.
This is a remake of the project found on the Tensorflow blog. We're going to use a lot less powerful chip in this tutorial, tough: an Arduino Nano (old generation), equipped with 32 kb of flash and only 2 kb of RAM.

We're going to use the RGB components of a color sensor (TCS3200 in my case) to infer which object we're pointing it at. This means our features are going to be of 3-dimensional, which leads to a really simple model with very high accuracy.

Open the Serial monitor and put some colored objects in front of the sensor: move the object a bit and rotate it, so the samples will include different shades of the color.

Save the recordings for each color in a file named after the color, so you will get meaningful results later on.

Don’t forget to sample the “empty color” too: don’t put anything in front of the sensor and let it record for a while.

If you do a good job, you should end with distinguible features, as show in the contour plot below. 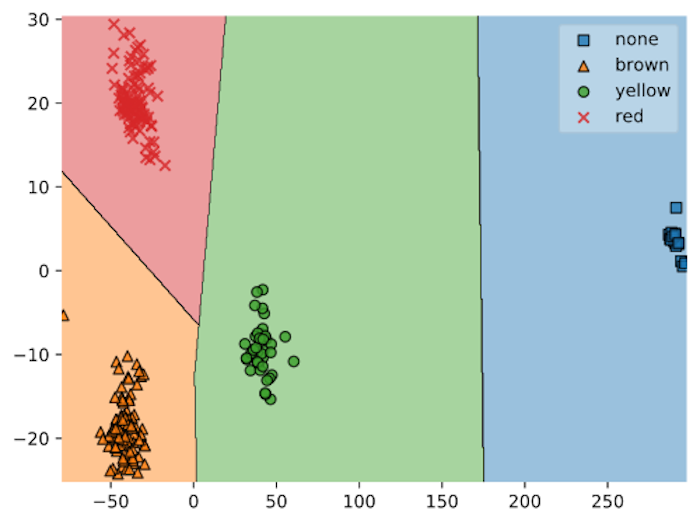 3. Train and export the classifier

For a detailed guide refer to the tutorial

At this point you have to copy the printed code and import it in your Arduino project, in a file called model.h.

Put some colored object in front of the sensor and see the identified object name printed on the serial monitor.

Do you remember the "empty color"? It needs to be recorded so you will get "empty" when no object is present, otherwise you'll get unexpected predictions

Given the simplicity of the task, you should easily achieve near 100% accuracy for different colors (I had some troubles distinguishing orange from yellow because of the bad illumination). Just be sure to replicate the exact same setup both during training and classification.

That’s it: you deployed machine learning in 2 Kb!

Did you find this tutorial useful? Was is it easy to follow or did I miss something? Let me know in the comments so I can keep improving the blog.